The medieval Asinelli Tower gets a new look with X BRICK

The medieval Asinelli Tower gets a new look with X BRICK

The traditional celebrations for the Christmas holidays are in full swing in Bologna, and their epicenter is the historic Asinelli Tower, lit up on its four sides and in all its height with spectacular color beams.

The medieval tower, the highest in Italy, is a universally known monument, one of the few ones perfectly intact up to the present day, and represents – together with the smaller Garisenda tower – the symbol of Bologna, one of the richest cities in history and culture of all Italy.

The important lighting installation was entrusted to Radio Sata Service, one of the major Italian companies in the sector of rental, installation and sales of audio, video and lighting systems for large shows, corporate and private events.

How was this project born?

“The request – made to Radio Sata Service by President Enrico Postacchini and Director Giancarlo Tonelli of Confcommercio Ascom Bologna – was to light up the ‘Asinelli Tower’ in its entirety with color changers, from 29 November 2019 to 6 January 2020 , throughout the period of the Bologna celebrations.

The project was called ‘Lights and colors for the Torre degli Asinelli’.

As Director Tonelli explained that it is an initiative of strong tourist appeal to further characterize the image of Bologna making it unique. Furthermore, he companies of the tertiary sector, which exercise an economic and service function on a daily basis, have strongly wanted it. In agreement with the Superintendency we have chosen a range of elegant shades of color that change at intervals of 15 seconds.”

After a comparison with various companies, we turned to DTS for the choice of the lighting bodies to use in the installation.
Radio Sata Service with its two Lighting Designers Roberto Dalle Donne and Giuseppe Tomasi, took care of and developed the artistic part of the project, creating a show that respected the original color of the bricks used for the construction of the Two Towers, with great attention to the centuries-long tradition of Bologna.”

Then, a ‘historically’ accurate approach.

“Right, but also carefully mixed with the desire for innovation of the city, curious to see its symbol in a new light.

To achieve this, we worked on shades and cross-fades that develop through alternations of two-color patterns and on the contrast between verticality and horizontality in the creation of these nuances.”

Why did you choose BRICK and X BRICK?

“X BRICK and BRICK proved to be the perfect choice for this installation, for which some technical features were fundamental:
* Advanced full color LED generation: a traditional lighting system for the Two Towers has been in operation for years; in this case the dominant and symbolic presence of the ‘Asinelli Tower’, capable of generating new interest and creating attraction for the lively historical center of Bologna, had to be emphasized with a dynamic use of colors.
* IP65 integral protection level: the projectors, in fact, remain exposed for 45 days to rain, cold and all the winter weather.
* High luminous flux, essential to adequately illuminate from below a structure 97.2 meters high.
The BRICK has a brightness of 14.277 Lux / 5 m; the X BRICK of 27.100 Lux / 5 m.
They are absolutely fantastic.”

Can you describe the installation?

“After a series of preliminary photometric calculations carried out by DTS, Radio Sata – together with his project technical director, Sean Cattani – took care of all the phases of the executive project, and defined the placement of the projectors and the optics to be used.

The projectors (supplied by the rental company Croma) were placed on the roof of the ‘Rocchetta’ in masonry that surrounds the base of the Tower, arranging them on the four sides, in 3 concentric rows along the perimeter of the same: 6 BRICKs with 20° holographic filters in the row close to the tower; other 6 units in the middle row and 4 X BRICKs in the outer row, with native 8° optics.

To achieve uniform coverage of the entire tower, we have differently modulated the light intensity of the three rows of projectors: the BRICKs near the base of the tower at 40% of their brightness; the central BRICKs at 50%, the X BRICKs at 100%.”

How did you program the sequences?

“The show was programmed on an Avolites Quartz and then recorded on a DMX recorder / player that plays back the show and the various nuances and cross-fades between colors. The programming was done for 4 consecutive nights from 01:00 to 05:00 so that the tests were seen as little as possible.

The ‘Asinelli Tower’ lights up every day at 17:00 and turns off at 01:00.
At the beginning of each hour a 3-minute show starts with intensity and color games, all managed by the DMX recorder / player, equipped with an astronomical clock.

The generation of a carefully selected range of colors and the modulation of the light intensity of the individual projectors have made it possible to obtain very attractive looks: from elegant cross-fades between different chromatic shades to dynamic movement effects with vertical and horizontal light ‘waves’.

For extra-ordinary activities – such as the extemporaneous coloring of the tower in red / blue with which the city celebrated the victory of the Bologna football team in the league – live management is possible, for which we have created the necessary connectivity. “

We thank Luca Tagliavini, owner of Radio Sata Service, for the interview he gave us. 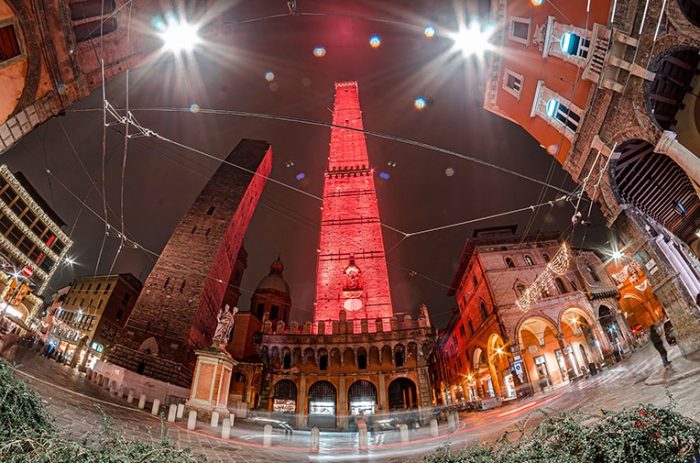 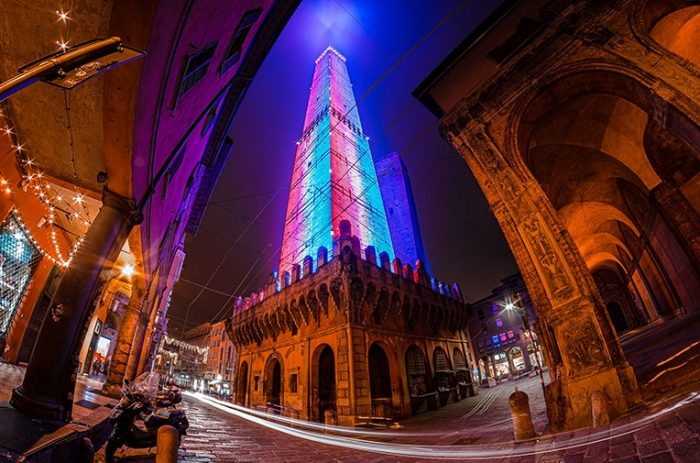 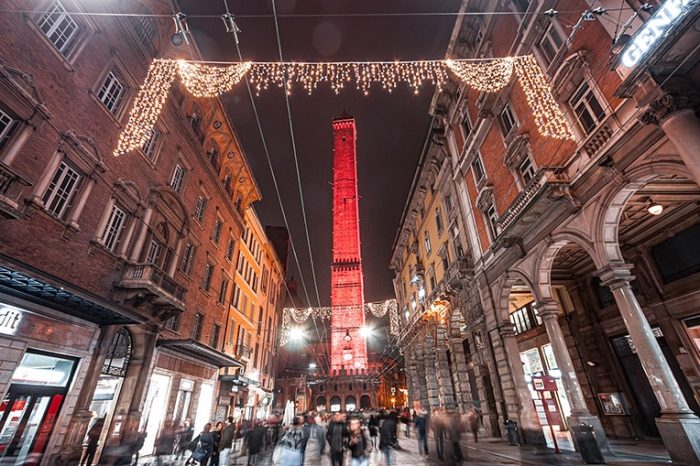 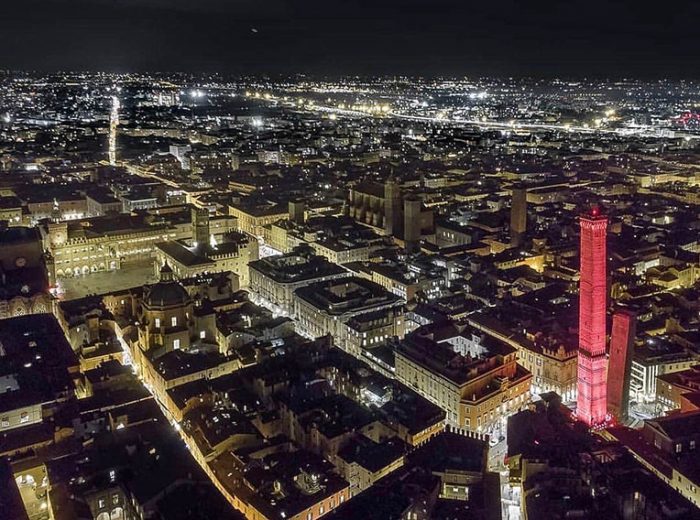 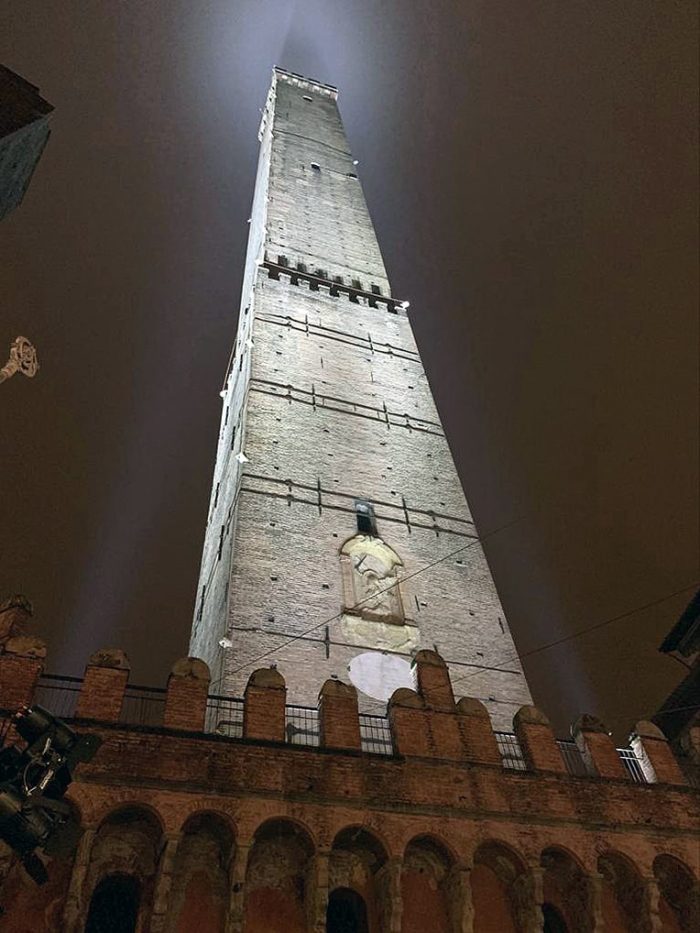 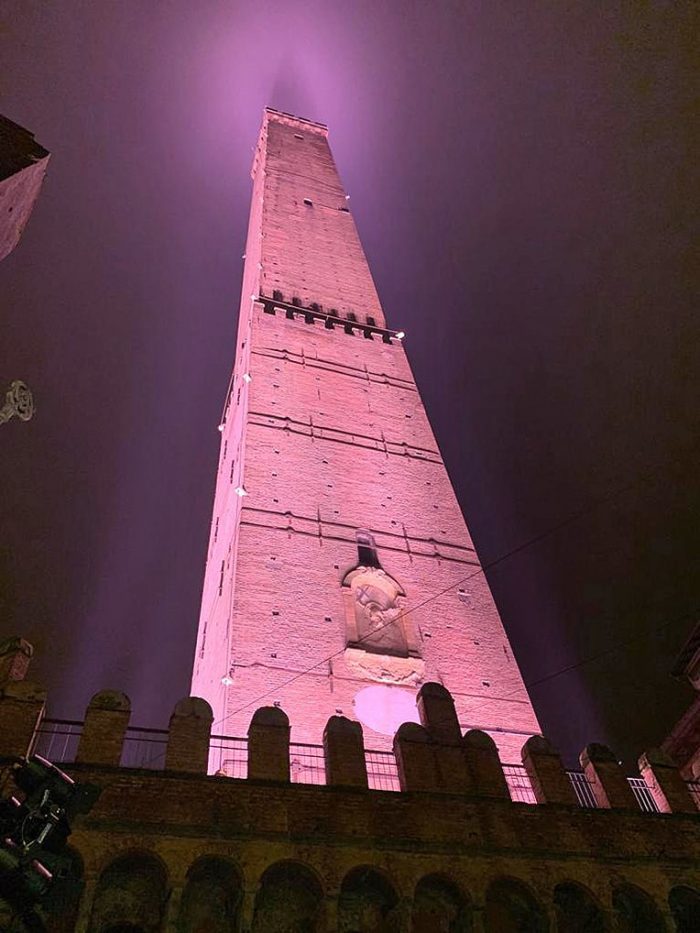