DTS lights up the baroque church of Santa Caterina d’Alessandria

DTS lights up the baroque church of Santa Caterina d’Alessandria

As part of the recent ‘Invisibilia‘ – a rich series of cultural events dedicated to enhancing the artistic / religious heritage of Palermo – the event ‘Spaces of lights in Santa Caterina d’Alessandria’ was held, entirely set up by Sinergie Group using DTS lights.

The inteview to Massimo Tomasino

Massimo Tomasino, Lighting Designer and Lecturer at the Academy of Fine Arts, was in charge of designing the light plot.

In Santa Caterina, a jewel of Sicilian Baroque, a ‘baroque’ use of light was evident, which surprised us with unexpected perspectives, filtered through the balustrades, crossed the beams in the central nave, redesigning the spaces.

“Exactly: I used lighting trying to recreate the atmosphere of an ancient convent of nuns (even using fog), to emphasize the architecture of this baroque church, despite the doubts that someone expressed about the use of fog and motorized projectors in this sacred context.

But the result was truly remarkable; furthermore there was not a single visible fixture, thanks to the skill of the Sinergie Group staff.

The WONDERs were spectacular, because they allowed me to light the floor, detail the columns, wash the fronts, all with the same LED projector.

As I know the WONDER pretty well, I used it to the best, for example by lighting only the central part of the columns with a very narrow beam right from below; or widening the zoom to its maximum to wash the floor, tilting down the lighting bodies and crossing the beams with a slow movement, very suggestive.

The WONDERs were positioned on the floor all around the church, even under the altar beyond the balustrade, all around the perimeter; using them from the floor with a narrow beam they perfectly highlighted the friezes of the columns.

I used the EVOs a lot: during the event there was an ensemble playing baroque music; we used 4 EVOs in backlight, and 6 more on the floor beyond the balustrade in the presbytery area; both as a spectacular radial backlight and to light up the huge chandelier hanging down above the transept.

When I lighted up with these 6 EVOs the dome full of paintings, at the end of the event, it was possible to admire details that had never been seen before; many stayed with their nose up for twenty minutes.

There were other special cues with EVOs’ light beams coming out of the graces placed on the two sides of the nave; gobos simulated the grating; I managed to light up all the little angels and pictures that are on the opposite side, as if it was natural light.

I also put the EVOs above the entrance, with extra bright beams tracing through the grids of the women’s gallery; with those EVOs I managed to cover a distance of 70/80 m and I perfectly lit up the statues and paintings placed opposite side above the altar.

With the MINI BRICKs I colored all the architectural elements.

I used them for their beautiful beam and the variety of projection angles; I lit up all the arches and side altars, as well as a series of large paintings, using the 40° holographic filter.

They were also very useful for lighting the altar of St. Catherine from the floor, in the chapel set on the right of the transept.”

What are the premises of your participation in such a unique event, focused on the words, images and sounds of the Sacred?

“’Spaces of Light in Santa Caterina d’Alessandria’ was born by chance; we had previously realized a similar event here in Palermo, in a didactic fashion: me, as a lecturer in lighting at the Academy of Fine Arts, and my colleague Maria Antonietta Malleo as a professor of History of Art.

It was sort of a ‘narrative lighting’: she was telling the milestones of that church, such as who built it, the meaning of a certain painting or a sculpture … I participated by using light as a further material of a single narrative. The event was so successful that we were called to do it also in the church of Santa Caterina D’Alessandria.

In this case the project involved various bodies, including the Music Conservatory which brought a baroque music ensemble; fundamental for the making of the event were the passion and the will of Father Giuseppe Bucaro, ‘Cultural Heritage’ Director of the Archdiocese of Palermo.”

The lighting installation of the church of Santa Caterina D’Alessandria for ‘Invisibilia 2019’ was created by ‘Sinergie Group’.

Alessandro Collazzo and Pierluigi Domino coordinated the project which, according to their words,

“has turned out to be an interesting field of application for DTS lighting fixtures in an appearance that is only easy to look at; the location, in fact, reserved many structural and aesthetic limitations, such as the need for a very clean installation, which made the projectors invisible during daylight hours of church visit, but perfectly functional for the evening event.

For the logistic and structural part, Sinergie Group has entrusted the technical manager Dario Di Bella, who also in this project has been able to find the optimal solutions and the due precautions that the location deserves.”

“The MINI BRICKs provided great versatility; thanks to their native 8° lenses I was able to reach distant points with high precision; the interchangeable holo filters helped me a lot in haiming the MINI BRICKs, quickly reaching the result I was looking for.

Furthermore, their compactness allowed me to easily place and make them invisible.

The WONDERs, with their luminosity and double zoom, have been fundamental to precisely color even the most distant surfaces, highlighting any details. They were essential to light up the dome, the choir of the enclosure, the main altar and the choir behind it, giving a magnificent effect of depth and a uniform color.

But the real star of the exhibition – goes on Mario Villano – was the EVO, a moving head that surprises me more and more every day for its versatility and power; being able to pass from 2 ° to 39 ° in a linear and fast way makes EVO a real wild card to be exploited in every situation.

A million and a half lux have helped us a lot, especially to light up the dome and is very distant details, without forgetting the autofocus that simplified our job a lot, and the gobos that allowed us to create very particular and suggestive atmospheres.” 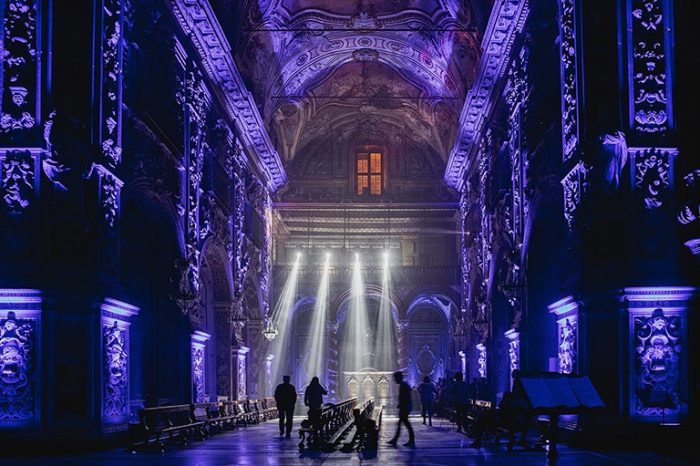 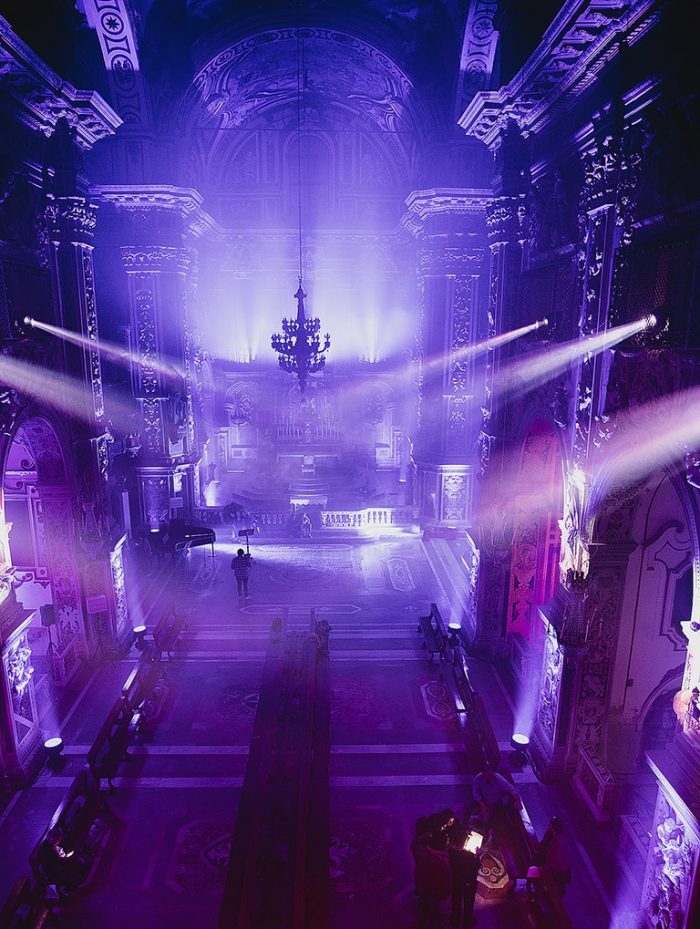 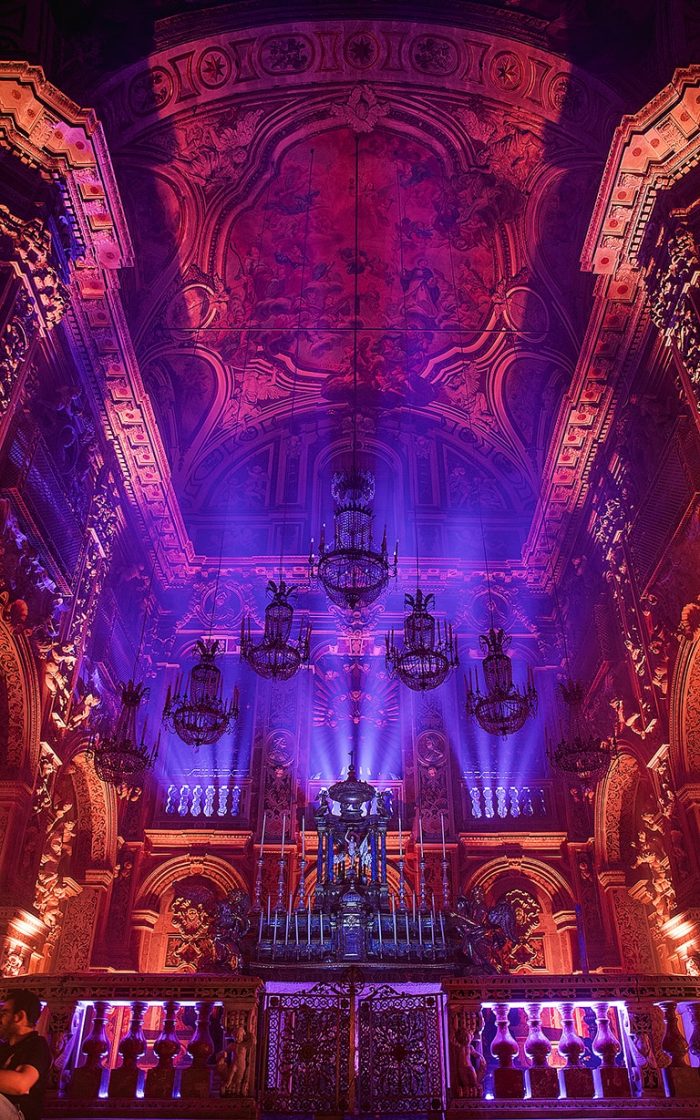 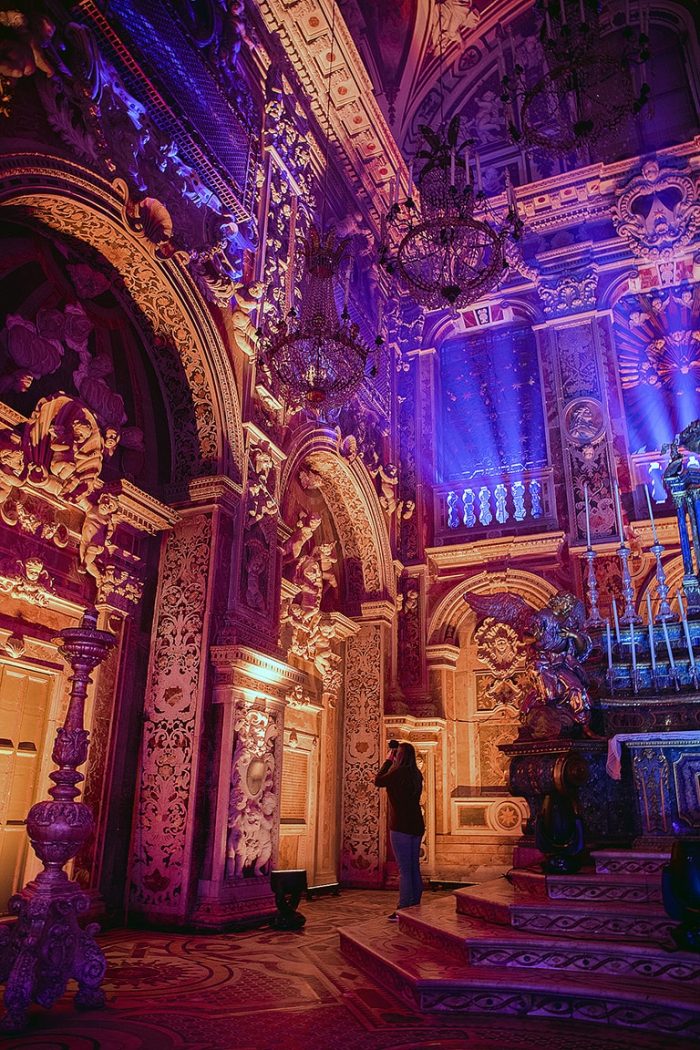 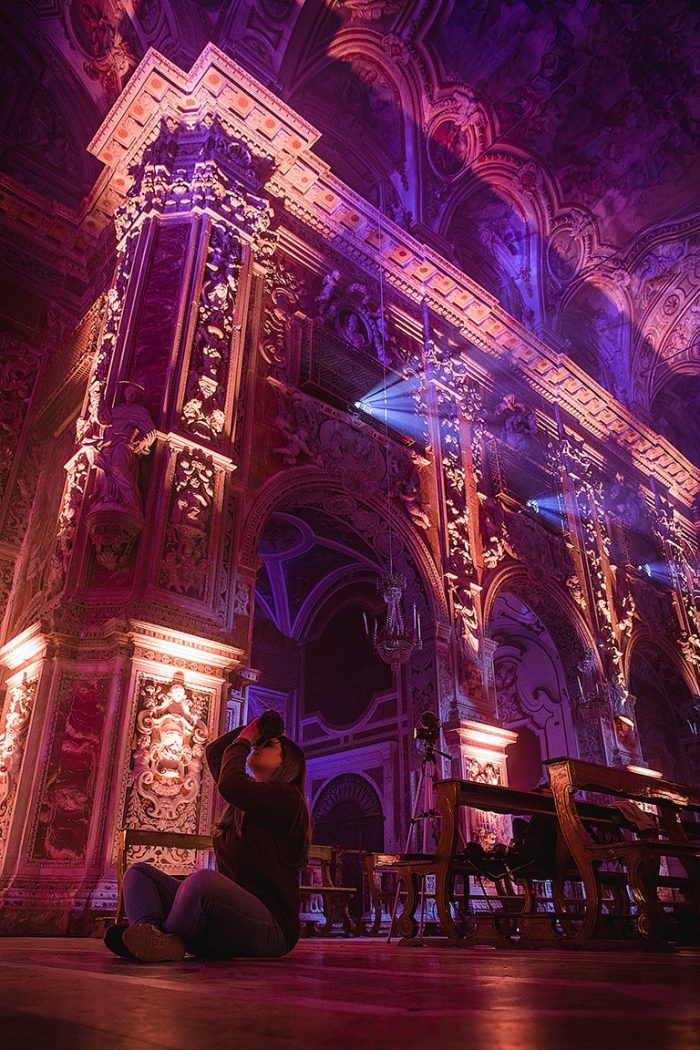 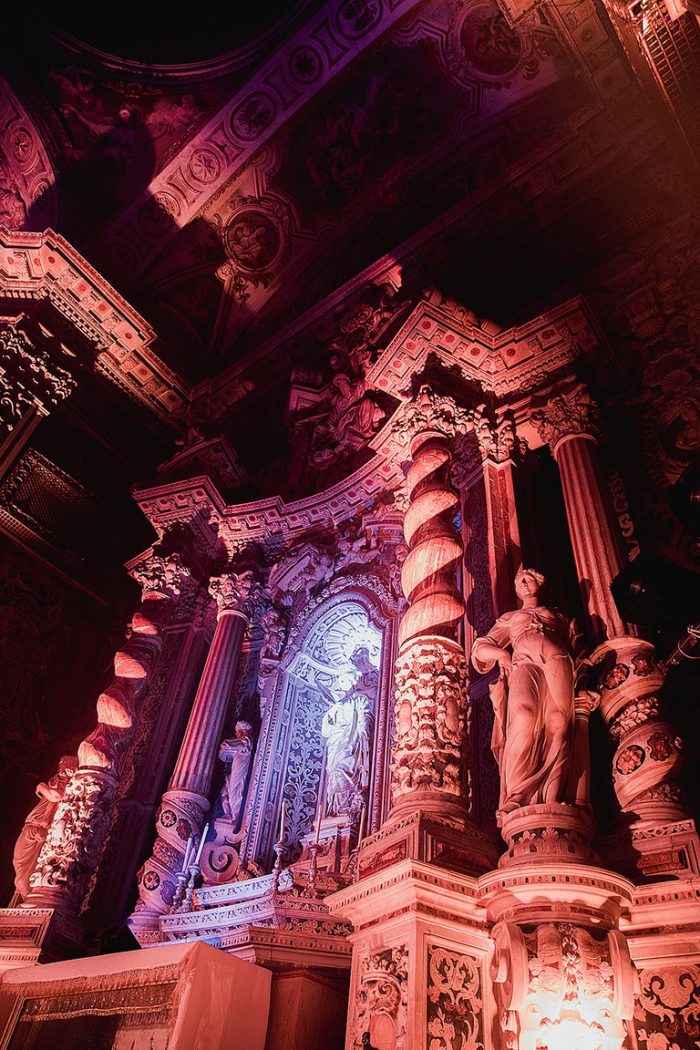 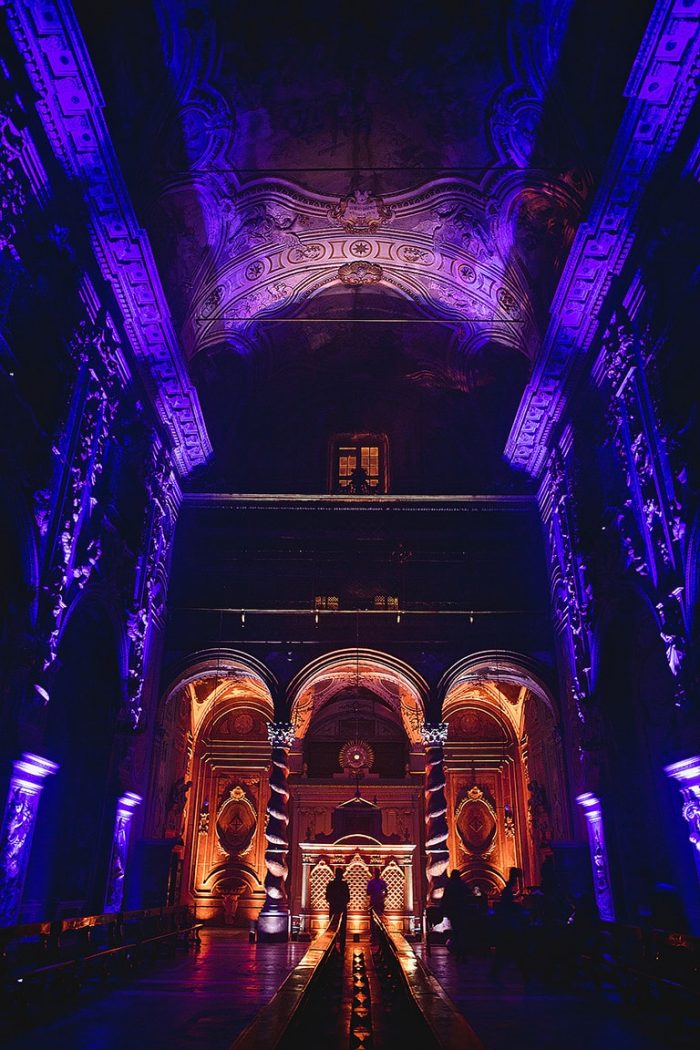