John Legend in Taormina: a magic lit up by DTS

John Legend in Taormina: a magic lit up by DTS

John Legend, world star of soul music, performed on July 25th in one of the most evocative places in the world: the Greek Theater of Taormina (Italy). It was John Legend’s only European exhibition, accompanied for the occasion by a 100-piece orchestra.

DTS is proud to have lit up this extraordinary concert that merged great music, millennial history and landscape magic into an incomparable event.

The interview to Nicola Mongi

We asked Nicola Mongi, lighting project manager at Madema Italia (One of the biggest italian rental company that was entrusted with the overall installation) to tell us how the lighting setup was born.

“The Greek Theater of Taormina is a beautiful complex. Being an historical masterpiece whose perfect preservation is protected, there are technical constraints to be respected. There are two truss systems pre-arranged on the right and left that let you illuminate the stage with side lights, and another small structure, in front of the proscenium, for front lighting.

You can’t set up large structures; there is a fixed pre-set-up consisting of halogen lights, and when an event takes place the production replaces it or integrates it with its own lights.

For the John Legend concert I did a lighting project based on my own idea, although I had never been to the Greek Theater, which frankly worried me a little.

We presented to the production the technical data sheet of the installation – comprising 186 DTS projectors (RAPTOR, NRG 1401, BRICK, KATANA, and WONDER) – which fully satisfied them.

We only used existing trusses; we chose not to set up anything else because the stage had to be empty enough to leave room for the 100-piece orchestra, except for a central LED wall, 2m x 5m, sort of a totem.

We didn’t build up other structures also because the natural scenery was so beautiful that we decided not to spoil it a bit. By the FOH, behind the first round of tiers there is a fairly low structure (2.2 m) on which we installed some projectors to light up the stage frontally and the audience near the proscenium.

I developed the lighting project autonomously as the production of John Legend did not make us specific requests; I took into account that unique location and its pre-existing structures. John Legend did not have its own LD, but a lighting operator who joined our own to create the concert lineup.

The setup included 8 DMX universes controlled by an MA 2.”

“We placed the RAPTORs on the ground along the edge of the stage, to the right and to the left; in a raised position behind the musicians; hanging on the trusses arranged on the wall structures that arise on both sides of the stage. Other RAPTORs were installed on the trusses by the FOH, to give greater depth.

We colored with the WONDERs the larger spaces, such as the walls to the right and left and the inside of the arches placed in the background; highlighting their surface and some details with the BRICKs, and lighting up the columns set to the right of the stage with the RAPTORs, to render the different volumes.

The KATANAs were placed in background to mark the stage outline and color it with a grazing light.

The atmosphere of the Greek Theater of Taormina was beautiful; the projectors integrated well with that unique place; in addition to their brightness and color quality, the choice of DTS projectors was perfect because they are all very compact and lightweight; the stage space – mostly dating back to 2300 years ago – is obviously to be treated with the utmost care and does not allow for cumbersome installations and heavy hanging.

Despite the very tight deadlines (only two days available for the set-up) I am really happy with the result. The audience and the production were enthusiastic about the show.” 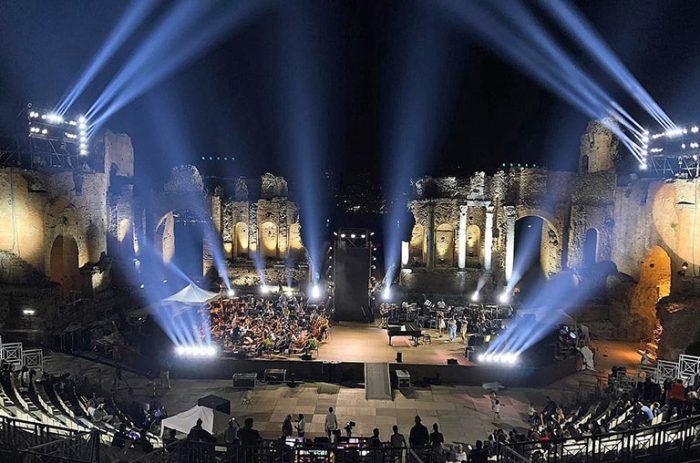 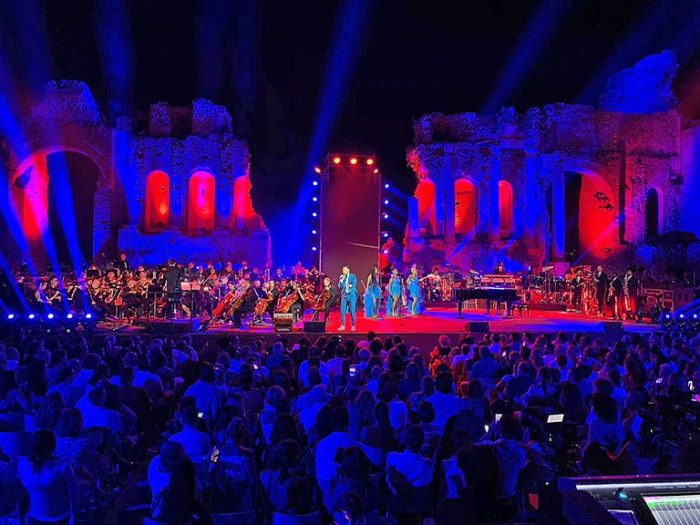 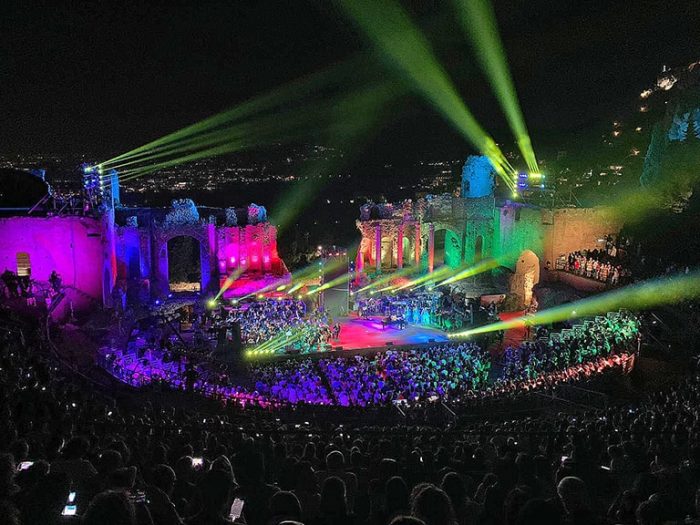 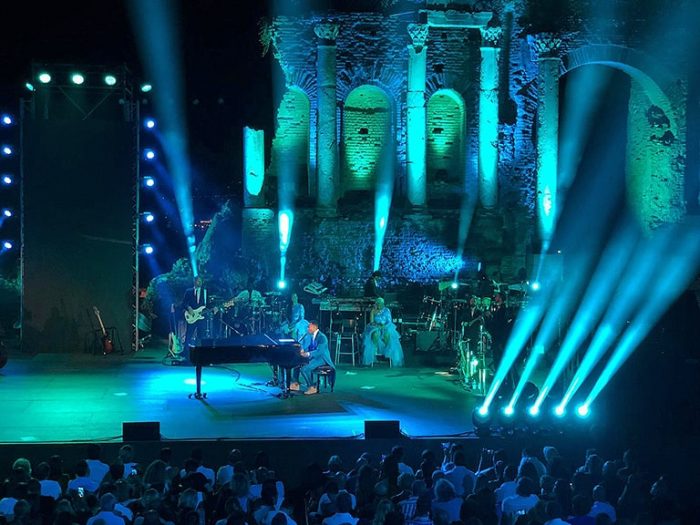 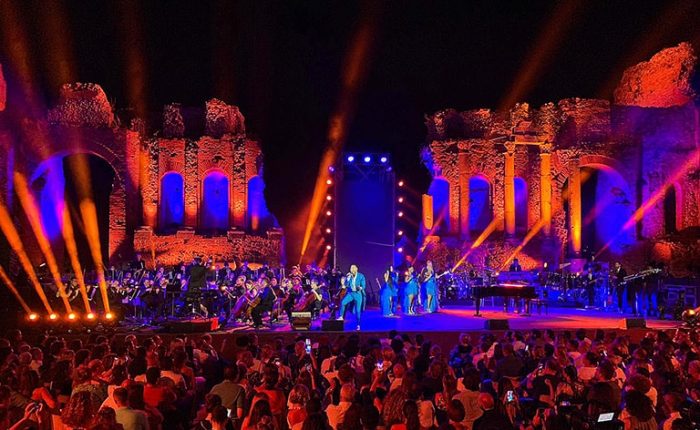 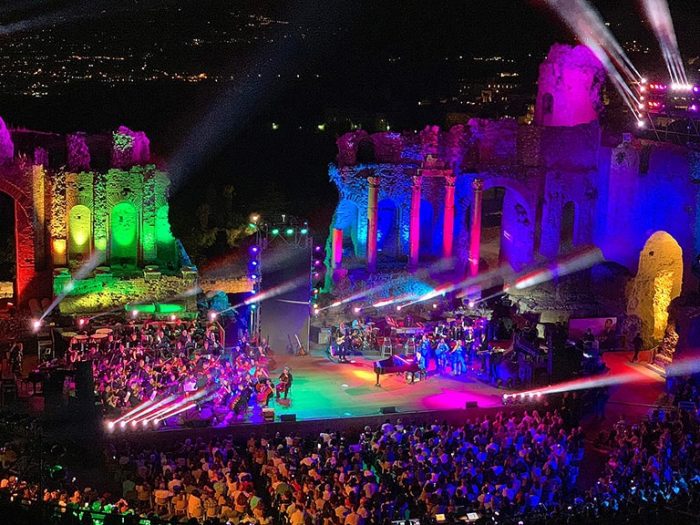 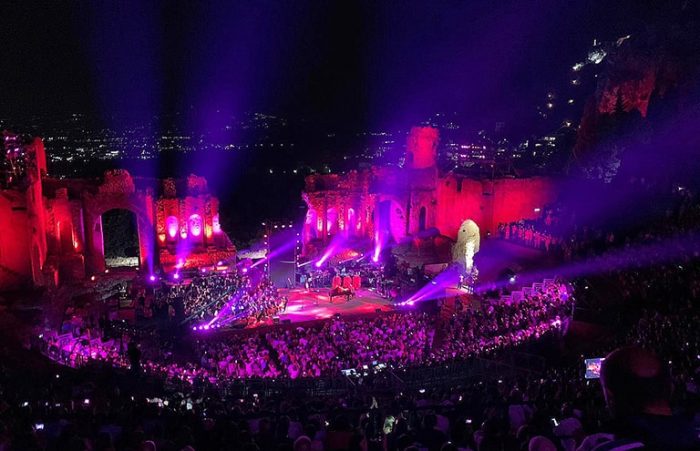