We met Marco Vignanelli in order to learn something more about one of his most followed TV shows since man years, airing in the afternoon and prime time as well: Canale 5’s “Amici di Maria de Filippi” (Maria de Filippi’s Friends).

Debuting in 2001 with the name “Saranno Famosi” (Fame), the show changed its name after just two years, while becoming the most followed and long-lived talent show in Italy.

For the creation of the evening show, airing during the winter season, a lighting plot that can be adapted to the numerous necessities of the format is needed.
The illumination needs to be able to deliver for each performance (and for every participating category) the right pitch and form. This means that the equipment needs to be chosen very carefully and on point for any real necessity.

In this scenario, DTS Illuminazione has the honor of counting among its ranks numerous luminaires which make up the light plot of this show, year after year.

Let’s uncover with Marco Vignanelli, Director of Photography in the television industry since at least twenty years, how the lighting of such a beloved TV-show comes to life.

Hi Marco, welcome back!
Can you tell us about how your work with the talent “Amici di Maria de Filippi” starts and how it develops from there?

My experience with the evening show of Amici starts in 2015, when I took the baton from Ivan Pierri, who introduced me into the show’s style and mood.

This show, which is the oldest in Italy in its kind and is airing since more than 20 years, evolved in time. During past editions there have been numerous changes, from the number of participating students, to their age, to the very disciplines performed on stage.

What never changed though is the format itself, recreating an out-and-out artistic school which gives to the students the patronage of prime teachers so that they can refine their techniques. The finishing touch is given by the dancing and singing showdowns, which the students bring on air at every episode of this TV-show.

The aim is to win the approval of the commission and to gather fame in the showbiz.

How did your creativity, lighting-speaking, followed the evolution of this show?

I think there has been a precise moment when the show “Amici” had a big turning point. This was in 2013 when Direction went to Roberto Cenci, a professional with a background without equals in the Italian TV showbiz, while artistic direction went to Giuliano Peparini (choreographer, theater director and internationally renowned dancer). This partnership has fundamentally separated the show from its previous iterations.

It is from this moment onwards that a more pronounced use of beam projectors started, with the aim of recreating atmospheres and lighting effects never applied on this show. At the same time more attention has been given to a lighting that would play on a chiaroscuro contrast, so that we could have more depth to the scene, the dance, or the song being performed at that moment.

This care gave to the evening show a more captivating and engaging image, so that it became an entertainment show in its very sense while differentiating itself from the day-time show, in which the students’ path is told in a more docu-reality way. The afternoon show is in fact characterized by white illumination, rightly fit for the designated study rooms. In this case, the lack of effect lighting is intended, precisely to differentiate the afternoon and evening shows and to give importance to the educational path of the pupils. On the other hand, the evening show becomes a place where the audience can meet the expected spectacularism, besides assisting the challenge between students.

The evening show “Amici: il serale”, according to your experience, is structured just like any entertainment show, so it is fundamentally subject to the audience’s taste, being them used to attend TV shows with high engaging power. The program, we’d like to remind our readers, sees the rotation of singing, dancing, and confrontation with the professors.

Does this complexity need a three-time lighting study? I expect it is important to have available a versatile rig which allows to change the lighting in a dynamic way without compromising the show itself.

In an evening show such as “Amici: il serale” the necessity to be versatile is fundamental, more than in any other Italian show (and, dare I say, even shows from abroad). To design a lighting rig so that it can be fail-proof is not easy: we could have a generic idea from the front shot, but the concept expressed in this show is always a 360° one. It’s impossible, from a script point of view, to foresee such dynamics.

With the passing of years, I acquired the necessary experience to anticipate some mechanics in order to be ready to find the immediate solution according to what is needed, without having to readapt the original lighting rig.

Finally, to answer your question: yes, it is fundamental to have a versatile lighting rig, but it is also very important to have an open mind with such a total and complex use of said rig. The ability to use these luminaires must be on par with their high quality and complexity.

Surely the experience and ability to use these fixtures is important. Being the ones making these products, always trying to answer to the needs of professionals, we are very happy to know that what we propose to you can find its place and that you are able to play around with effects or offer to your public a captivating light show.

For the 2021/2022 edition, what was the basic concept from which you started?

Scenography for the latest two edition remained the same so the rig, in its majority, remained unchanged. Anyway, what I fundamentally believe is that the light must be at the show’s service. With no doubt, the answer to this need is the research of a right balance: lighting must not eclipse the show, it must let it pop out.

The main aim of the light rig, in the evening iteration of this show, is the one of always putting the student at the center, while scenography and lighting delivers to each performer the adequate mood to their performance, besides their persona.

The objective you gave yourselves for the realization of the light plot and the scenography is very interesting and worth of great respect.
It is very important to give the right importance to the student for a show that wants to deliver artistical teaching and training. Of course, the level of these pupils is already very high, with high level teachers as well – we really can say that “Amici di Maria de Filippi” has shown how a great success can be such a TV show.

You’ve been working for years with DTS fixtrures. Can you tell us what kind of projectors and how do you used them into the light plot?

The rig design was born from the need to have at hand different available scenarios. First of all, RAPTOR has been used as a beam and that helped us, during performance, to draw a space both laterally to the LEDs projectors and for the realization of the light ceilings.

In the last two years we even thought to have a LED-wall pavement, which was recently replaced with video projection towards the floor. Besides from LED walls, we positioned RAPTOR and BRICK on the vertical perimeters. These two fixtures together helped me a lot when I had to program the musical timings. For this need, I especially appreciated the BRICKs, which I used in various pieces.

In many occasions RAPTORs have been used also as key-light for the dancing body. Using them laterally, in fact, they allowed us to draw very carefully the silhouettes of their bodies. This example brings us to the necessity of knowing well the fixtures and how to use them in different situations.

RAPTORs and BRICKs have been also mounted along the whole front perimeter, in order to clearly define the tail slate. SYNERGY 5 PROFILEs have been used as spot/profile, and they ended up becoming essential to the rig. They’ve also been used as key-lights for all existing positions and they ended up being very fast in their framing and easy to use when it came to tune their color temperature.

Throughout the whole central set, we positioned several RAPTOR groups (by 3, 4 and 5 units) which allowed us to do some very impressing closings at center stage.

Another nice one is the 2.5 x 2.5m truss square which was mounted on winches, so that it could be lowered around the singer. On it, there were rigged sixteen EVOs. I chose this fixture for this particular moment because I was interested in being able to change CMY colors rapidly. Also, the zoom allowed me to have several beams that could be opened while the truss square was moving.

At bottom stage there were two moving rigs, on which we rigged RAPTORs and KATANAs (my favorite LED battens!). Thanks to this we could achieve a multi-functional backwall: you could have a night-starred background, or you could accompany the dancing and singing Rock’n’roll performances.

We also realized a binary of trusses where we mounted fourteen NICK NRG 1401, with the aim of following the camera movement from the beginning of the scene up to center stage, while playing with the pixel-to-pixel control available on these NICKs.

Finally, the audience was illuminated with NICK NRG 1201.

In later years, DTS also is trying to better itself and improve the lighting performances of their products. Did you already have the chance to work with our latest luminaires?

As of today, I didn’t’ yet have the chance to work with your latest products. I sure hope that I will be soon able to check out the one fixture I think is the most interesting in later years: ALCHEMY 7. It’s definitely a more theatrical projector than a studio one, but it still sound interesting. I hope I can use it soon!

Thank you Marco for this interview. 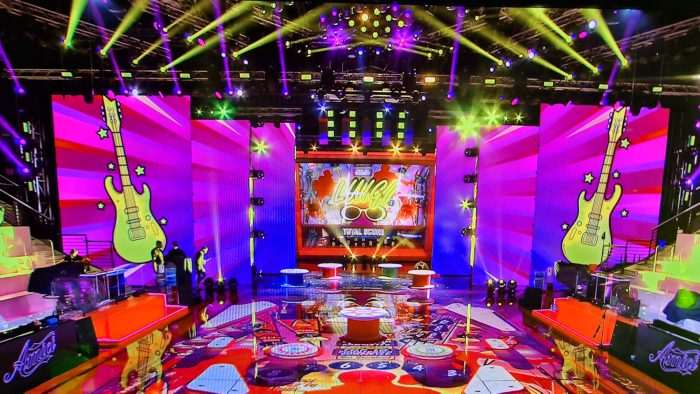 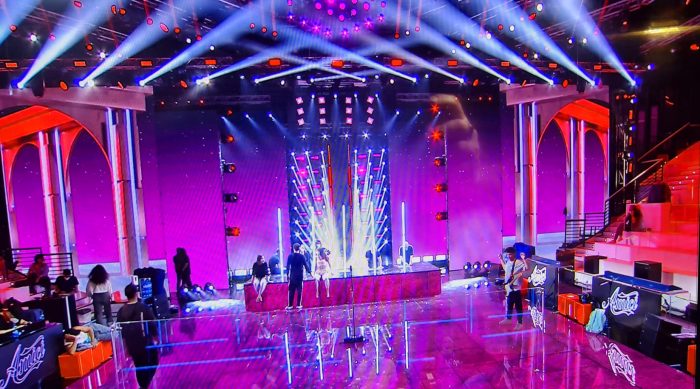 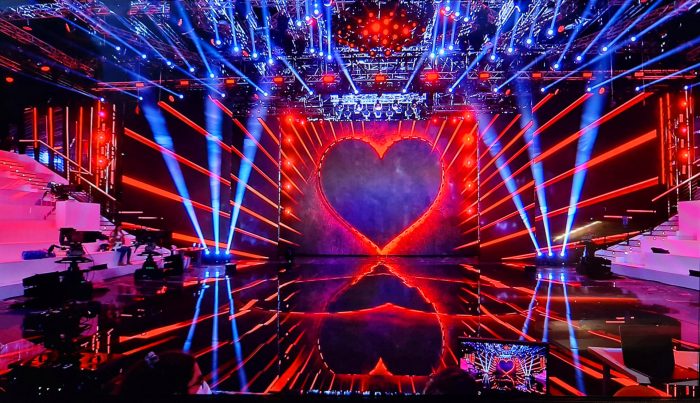 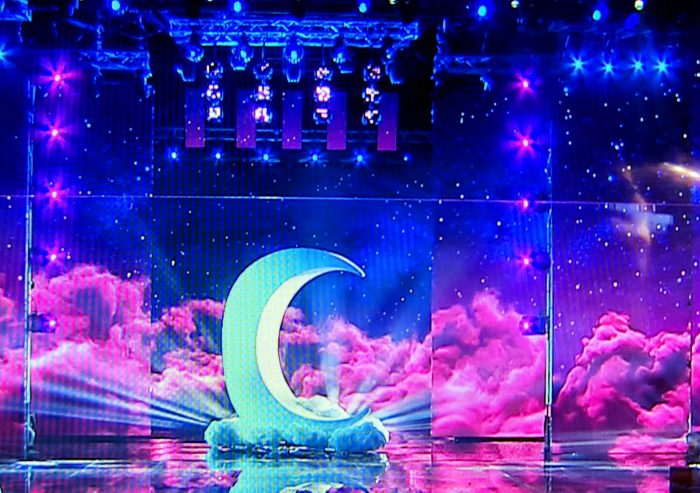 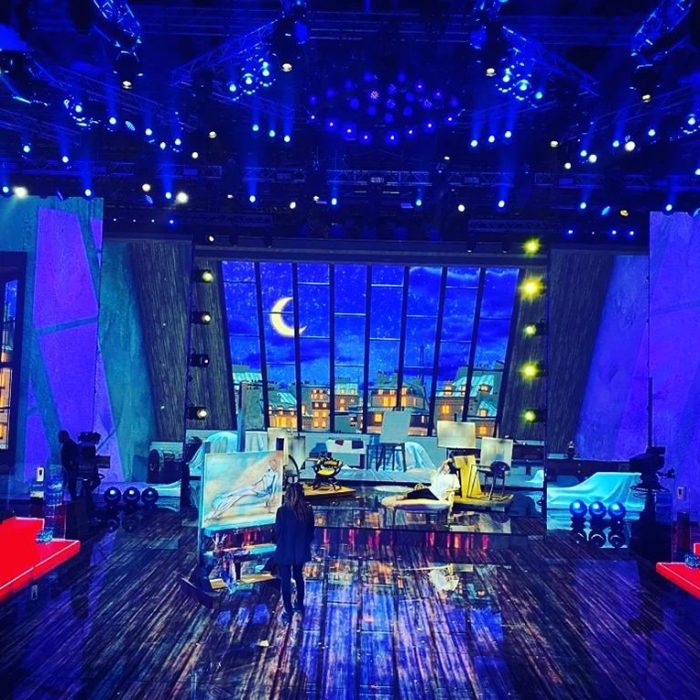 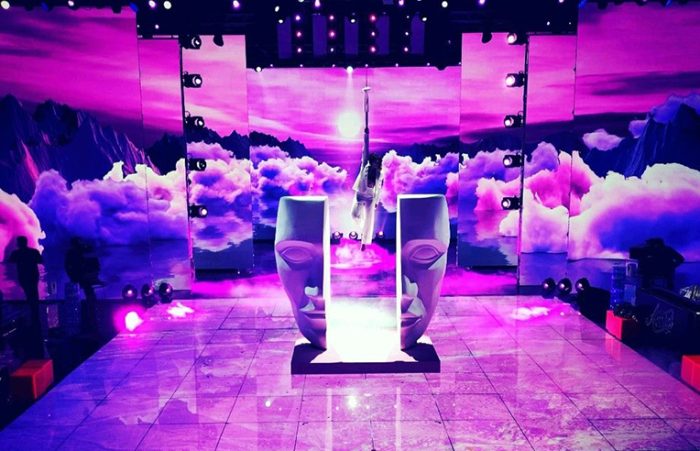 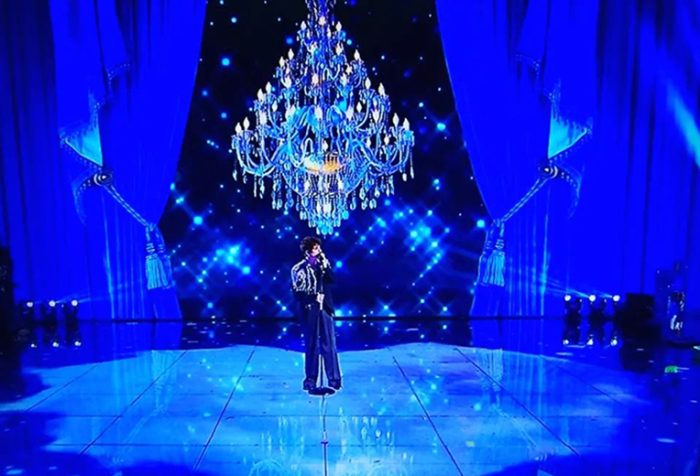 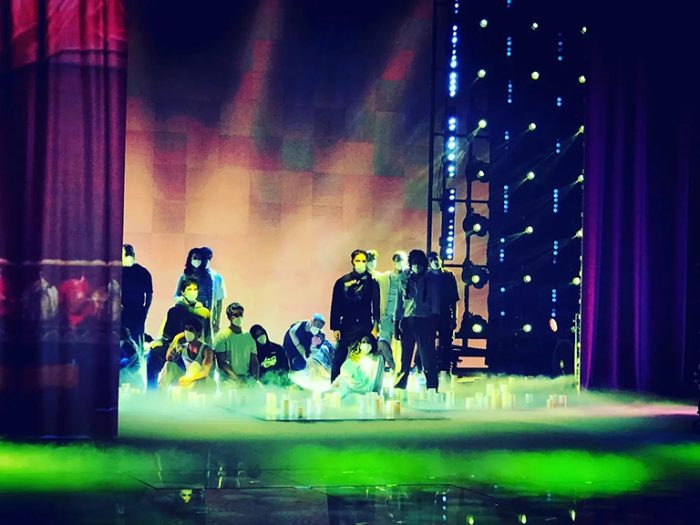 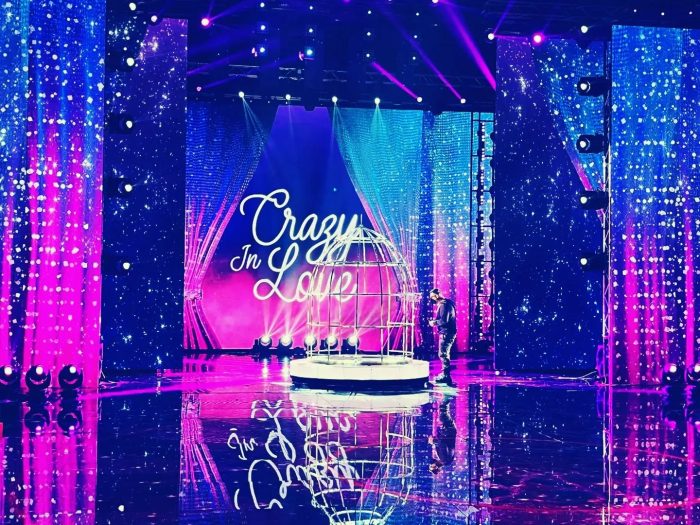 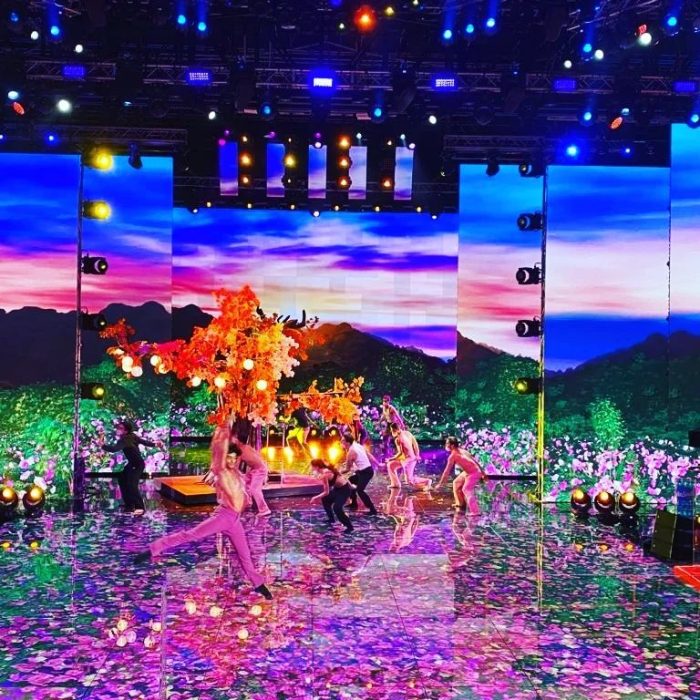 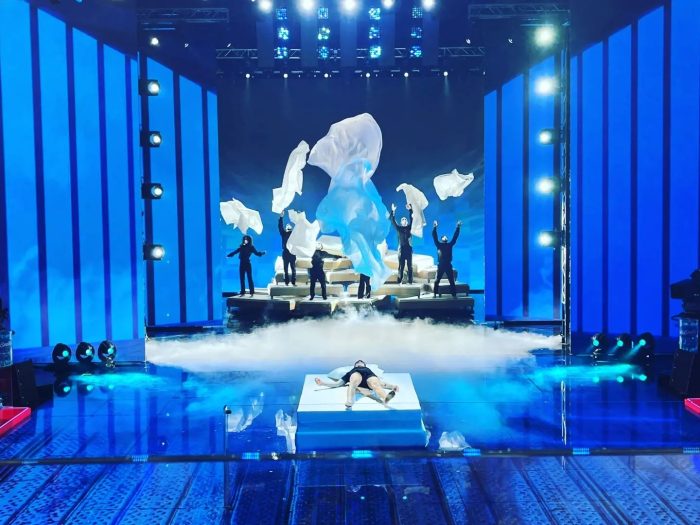