Proscenium offers young talents the opportunity to make their music known in a highly professional context: a jury composed of top Italian experts, a 35-piece rhythm-symphonic orchestra, a technologically advanced theater – the ‘Lyrick’ – transformed by the rental company ‘New Wave‘ into a set worthy of a television studio. A carefully designed lighting, on the orchestra as well on the artists, which integrated every performance with a showmanship never intrusive, but always perfectly functional; a visual quality worthy of a prime time show of a national network.

The interview to Vincenzo Casadidio

J: Tell us about the lighting project.

“The idea started from Roberto Lipari (Artistic Director) who called me again this year for the management of the second edition of ProSceniUm 2019, as technical manager and supplier with New Wave srl. All the lighting setup has revolved around a particular shape of LED wall designed to achieve a very marked depth effect, which we reworked together a dozen times, and also around a scenography custom-designed for the orchestra. After all, this year we promised to raise the level a lot, so as to give the show a prime-time television look. Following this idea, the lighting design was made by Patrick Vitali, LD of the event, who studied the ideal position of over 200 motorized fixtures.”

J: Which DTS projectors did you install?

“I used 109 fixtures by DTS in this setup: KATANA, RAPTOR, NICK NRG 1401 and NICK NRG 1201 units.
The KATANAs were placed on an horizontal truss behind the LED wall and on two vertical supports hanging from the same truss.
The NRG 1201 units were mainly dedicated to the orchestra, as well as a part of the NRG 1401 units, used both as frontal lighting reinforcement and as effects.
We arranged 32 RAPTORs trying to emphasize the depth and the three-dimensional scenic space given by the LED wall; that’s why in addition to those on the trusses we also had 6 RAPTORs in two ‘swings’ set between the LED walls, and 4 more units by the two LED walls at the entrances to the stage.”

J: How did you use them?

“We used the NRG 1201 in 20-channel mode to access all the possible resources of the fixture.
We set the NRG 1401 in 33-channel ‘shapes’ mode, and the KATANA in 24-channel ‘chase’ mode; this to have all the power and preset effects of the two fixtures available.
We used all the functions of the RAPTOR: gobos, prisms, colors, and in some scenes even the frost filter.”

J: Which of their technical features were most useful to make a show of this level?

“The KATANAs were the best surprise; we have fully exploited the tilt movements, the zoom, the dimmer, the strobe, and the preset effects … they were exceptional.
For the NRG 1401 my main assets were no doubt the colors, the brightness and the effects; for the NRG 1201 they were the colors, zoom excursion and dimmer linearity.
As far as regards the RAPTOR, my main resource was its terrific luminosity.“

J: What’s your opinion on the overall performance of the DTS projectors?

“Truly effective and versatile. The KATANAs were the real surprise: useful in uncountable applications, bright, capable to deliver outstanding, impact effects. The RAPTORs are so bright that sometimes you got to limit their power by dimming it a lot.”

J: How did you control the projectors?

“We used an Avolites Titan Arena as the main console; also for security reasons we networked and configured an Avolites Quartz in backup / multiuser mode.
We connected a PC in the same network to display the rendering of the project in real time with Capture. 12 DMX universes in total: 8 controlled via Artnet; 4 using physical outputs, for a total of 6,144 DMX channels.

LED walls always tend to ‘eat’ the projectors; in this case the beams were perfectly visible.
The width of the LED walls was impressive (about 100 square meters of panels arranged on several levels to give a sense of depth). We worked on the content first; the colors of the graphics have been studied piece by piece so as to reduce backlighting. We also made an accurate calibration of the LED wall brightness; a correct arrangement and pointing of the lights (orchestra, singers, guests, presenters, audience) did the rest.
The event was broadcast in live streaming with tv shootings from various positions, so it was essential to counteract the LED wall to prevent the shots from being underexposed.”

We thank Vincenzo Casadidio, Managing Director of ‘New Wave’, for the interview he kindly granted us. 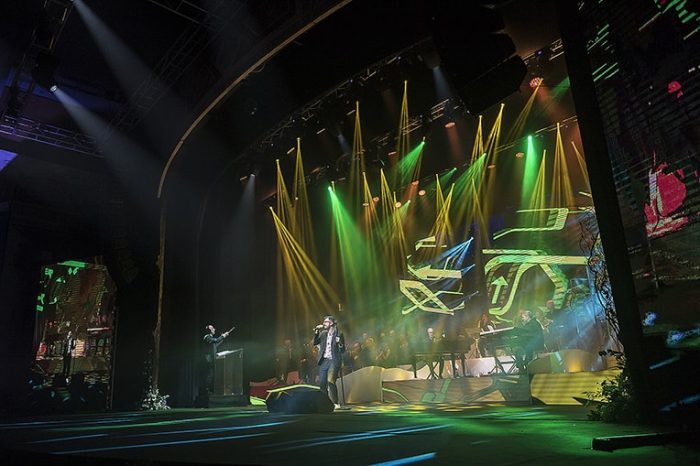 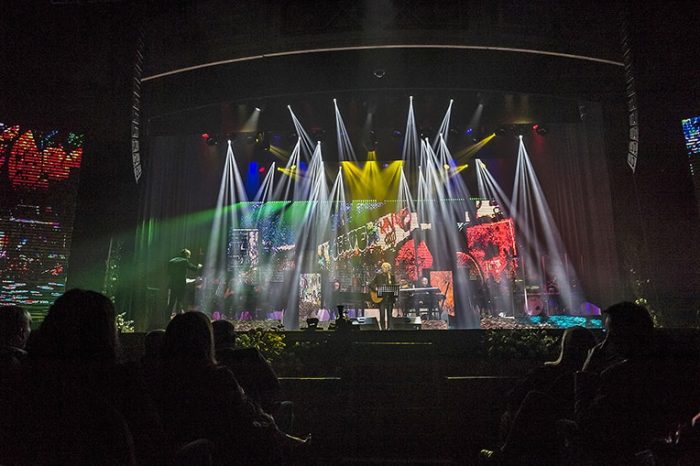 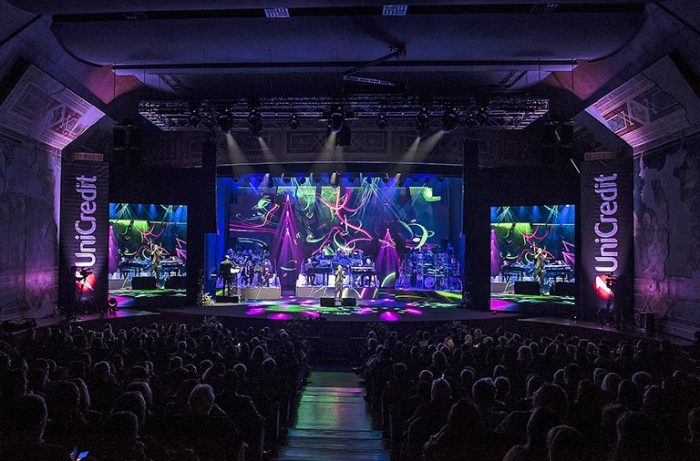 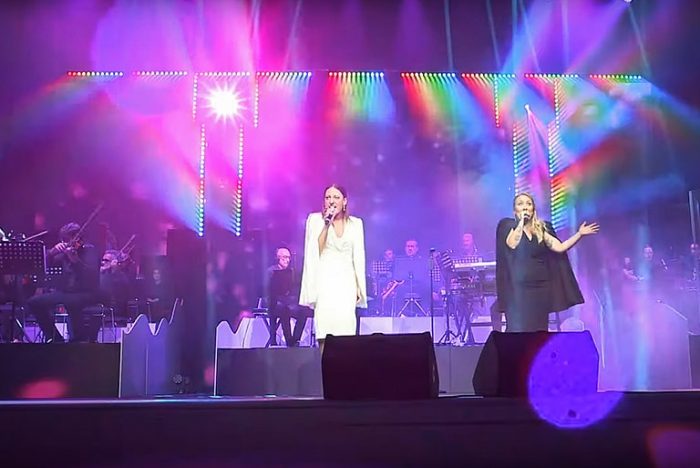 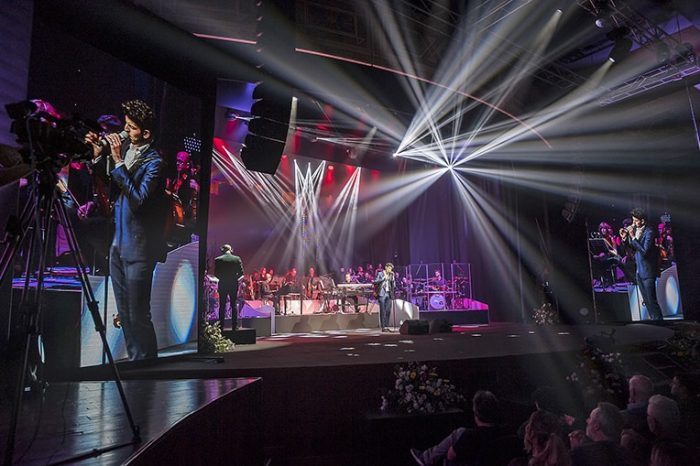 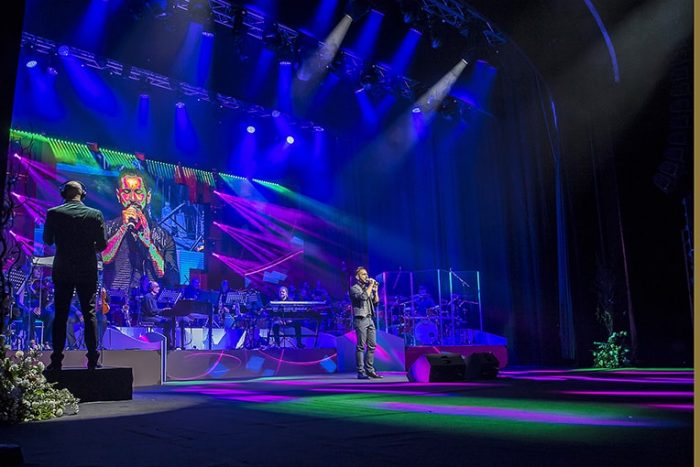