On July 5th, the Galà ‘Una voce per Padre Pio’ (A voice for Padre Pio) was broadcast live on RAI 1, from the churchyard of the “Sacra Famiglia” church in Pietrelcina. A special edition for the 20 years of the show, which brought together the great names of music and entertainment, and proposed stories of devotion and solidarity that have as their common denominator the life and teaching of Saint Pio of Pietrelcina.
The television event was lit up by 226 DTS projectors provided by Madema Italia.

The interview to Gianluca Bronzini

‘A voice for Padre Pio’ is a television event that – in the tradition of this broadcast – has combined art, music and spirituality. Photography and lighting are fundamental elements that could express the same theme in many different ways.
From which concept did you start to decide which luminaires to include in your light plot and how to use them, and with whom you shared the project?

“I shared my lighting project primarily with the production I have been working with for some years now. Being a prime time RAI broadcast, the lighting project is based on the concepts of cleanliness and elegance.
This is what I discussed it with the director Roberto Croce. We agreed that the focus should have been on the storytelling, with a sober but elegant format.

With the relatively tight time we have when shooting a TV show on location, I really like to use the newest technologies. In this case I chose the SYNERGY 5 PROFILE, a LED moving head that I specifically used to make the key light; so all the key light of the subjects and of the stage was made exclusively with SYNERGY. With a careful programming of the beam shaping, I lit up the artists and their faces, while maintaining the surrounding context perfectly clean. The internal 4-blade profiler was very important: knowing enough about SYNERGY allowed me to deal effectively with this situation.

The DTS fixtures – installed on three layer towers about 25 meters off the stage – gave me the opportunity to have a very clean control over lighting, the same I would have obtained using the classic projectors and profilers.

I worked with whites at 5600 K, which allowed me to take full advantage of all the nuances of the colors I used; such as with the NICK NRG 1401, which colored the scene and the orchestra.
This way the camera gives you a greater color rendering, much more lively and richer than working with the classic 3200 K.”

“The concept I applied to the stage was to leave the church as a scenographic background, wrapped laterally by some LED screens that I added to the project, avoiding roofing and everything needed setting up the usual ‘box’. Therefore all the lights were set laterally at the maximum height we could reach, about 7 meters; this made the planning a bit difficult, because I had to make sure that the church always remained predominant on everything else framed in the shootings; I lit up the façade with the NRG 1401 and the BRICKs, as well as with the FOS bars, which I set on the floor to evenly color the lower part of the façade.

The BRICK units were set behind the two horizontal LED wall banners arranged frontally along the edge of the stage; a structure that allowed me to color the façade from the middle upwards, with the native 8° optics.
I dimmed a lot the BRICKs, as we were working with the cameras with very open diaphragms.”

LED walls are now everywhere; but in this case it seems that you used them in a more ‘descriptive’ function than spectacular, creating ‘theatrical’ scenes supporting the personal narrative on faith and religiosity.
I guess that using very dynamic images would have distorted the general concept.

“Yes; I used a central LED wall surrounded by the RAPTORs; a somewhat drastic choice if you want, because choosing an element of technology like a LED wall that completely closes the entrance to the church is a rather risky choice. But the TV broadcast required it: there had to be a technology capable of showing the video content.

We kept the size of the LED wall as small as possible: 3 meters by 5, a vertical structure that left the central mosaic with the Christ clearly visible; we highlighted it in a delicate manner with the NRG 1401 units, with side and front projections that rendered its richness.
I placed another 8 NRG 1401 units behind the side LED walls near the church: by lighting up the upper part of the church and the cornices with a side projections we gave relief and a beautiful dimension to the whole.

Shaping the beams of 4 more SYNERGYs, I lit up the mosaics, the fronts of the church and the central rose window.

I placed the EVO moving heads right on the floor, in two groups to the right and to the left of the center stage, with a purpose: in fact in the close ups, which prevail during the interviews and in some performances, I always tried to avoid having the LED wall pixels in background; that’s because working with very open diaphragms the depth of field is little and viewers would have seen all the blinking RGB pixels, a quite annoying image.

So I canceled that kind of background by interposing the EVOs tracing beams of colored or white light, which masked the pixels and made the shootings a little more “magical”.
The EVO was the right fixture: a full-bodied projection with an intense beam that recalls the classic ACL: a moving head that I consider outstanding also for that type of use.”

We thank Gianluca Bronzini, Director of Photography of the show, for the interview he gave us. 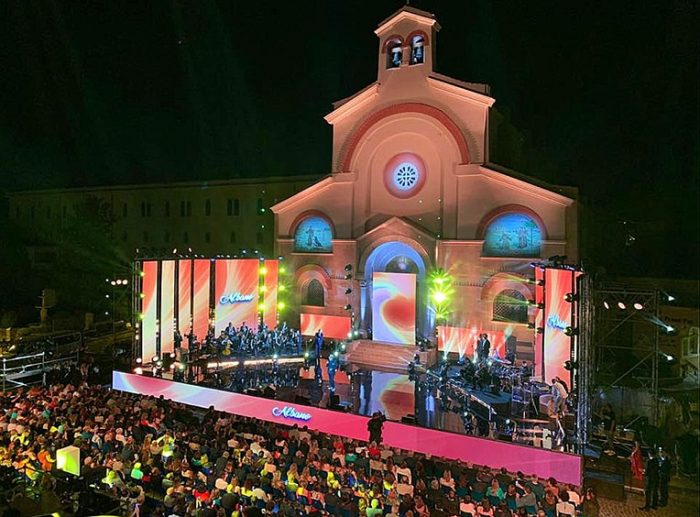 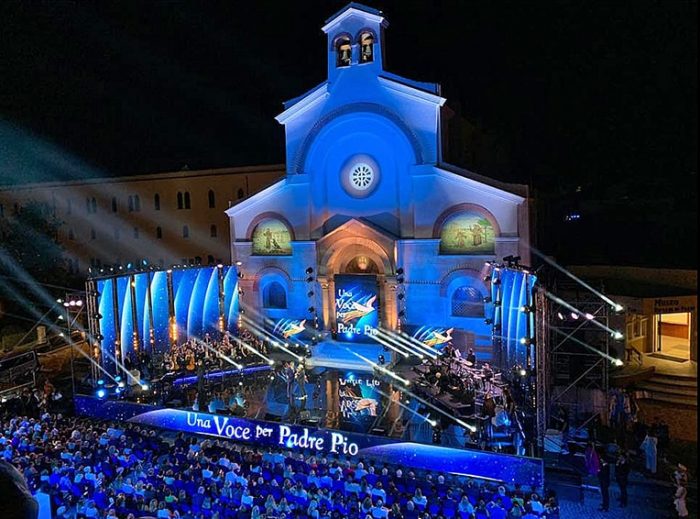 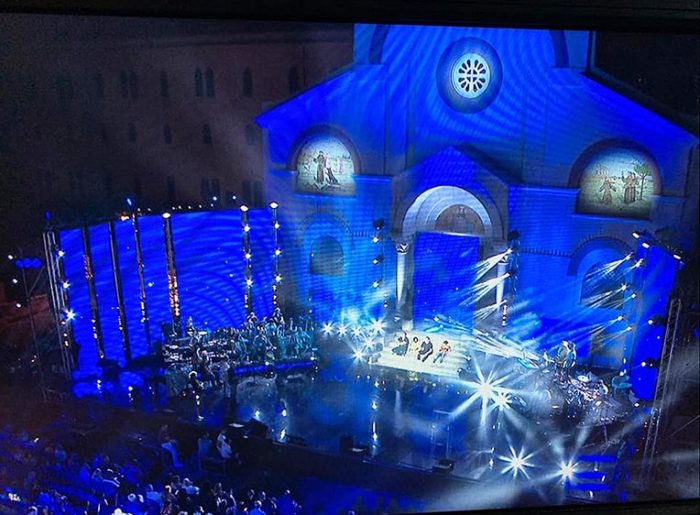